Aircraft parabolic flights are a useful tool for performing short duration scientific and technological experiments in reduced gravity, to train astronauts in this new environment and in associated procedures and protocols, and to test experiments and instrumentation prior to future space missions. The principal value of parabolic flights is in the verification tests that can be conducted prior to space experiments in order to improve their quality and success rate, and after a space mission to confirm or invalidate (sometimes conflicting) results obtained from space experiments. 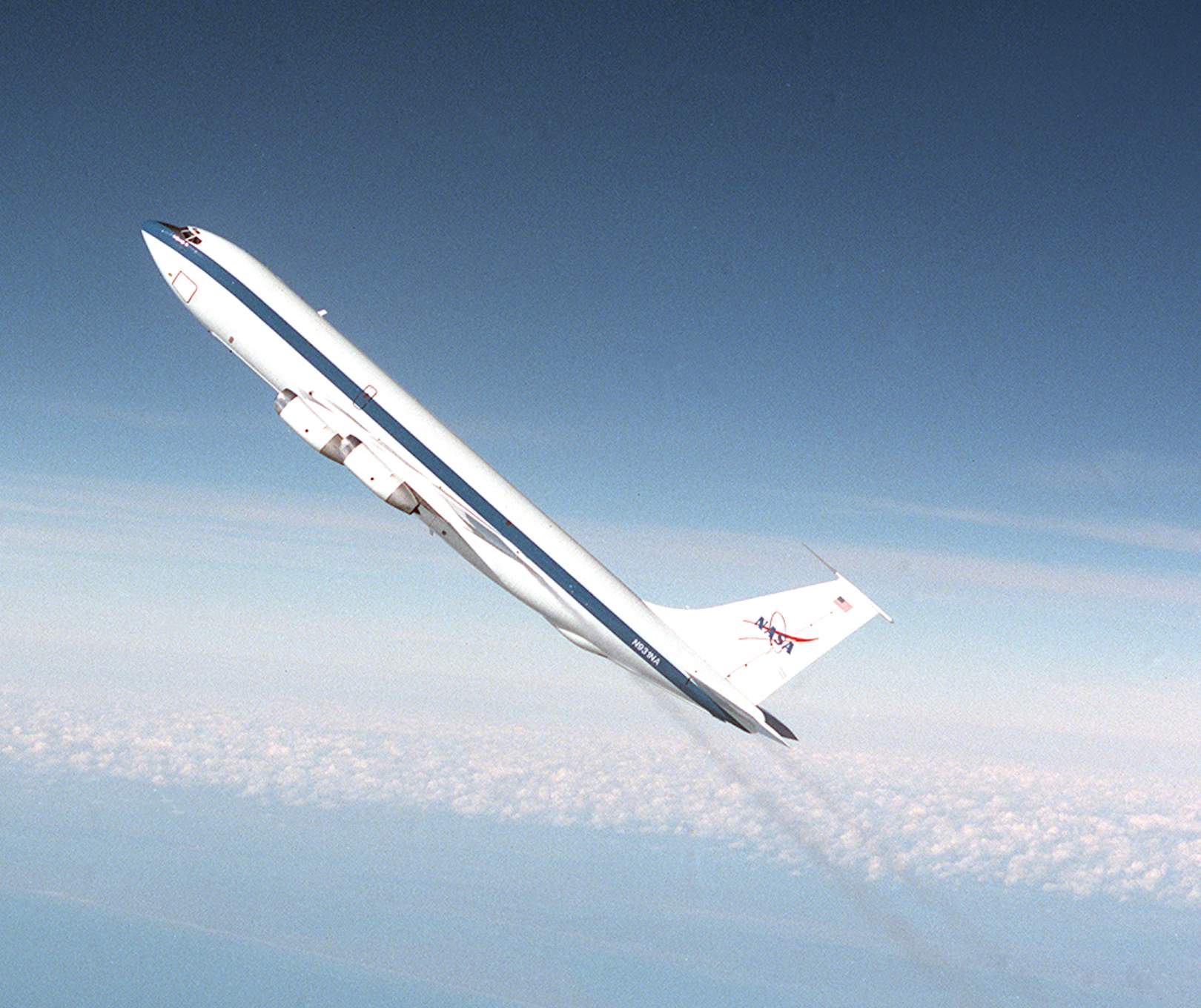 The main advantages of parabolic flights for reduced gravity investigations are: the short turn-around time (typically of a few months between the experiment proposal and its performance); the low cost involved (space agencies provide the flight opportunity free of charge to selected investigators); the flexibility of experimental approach (laboratory type instrumentation is most commonly used); the possibility of direct intervention by investigators on board the aircraft during and between parabolas, and the possibility of modifying the experiment set-up between flights. 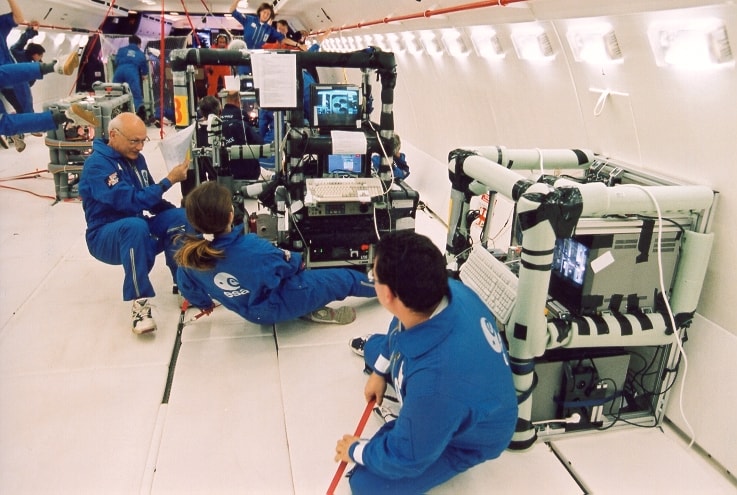 Experiment on vibrational phenomena during an ESA campaign (Credit: ESA)

Parabolic flight objectives pursued by investigators vary. From a scientific point of view, the following objectives can be attained:

(3) The study of transient phenomena occurring during the transition from high to low and low to high g phases. 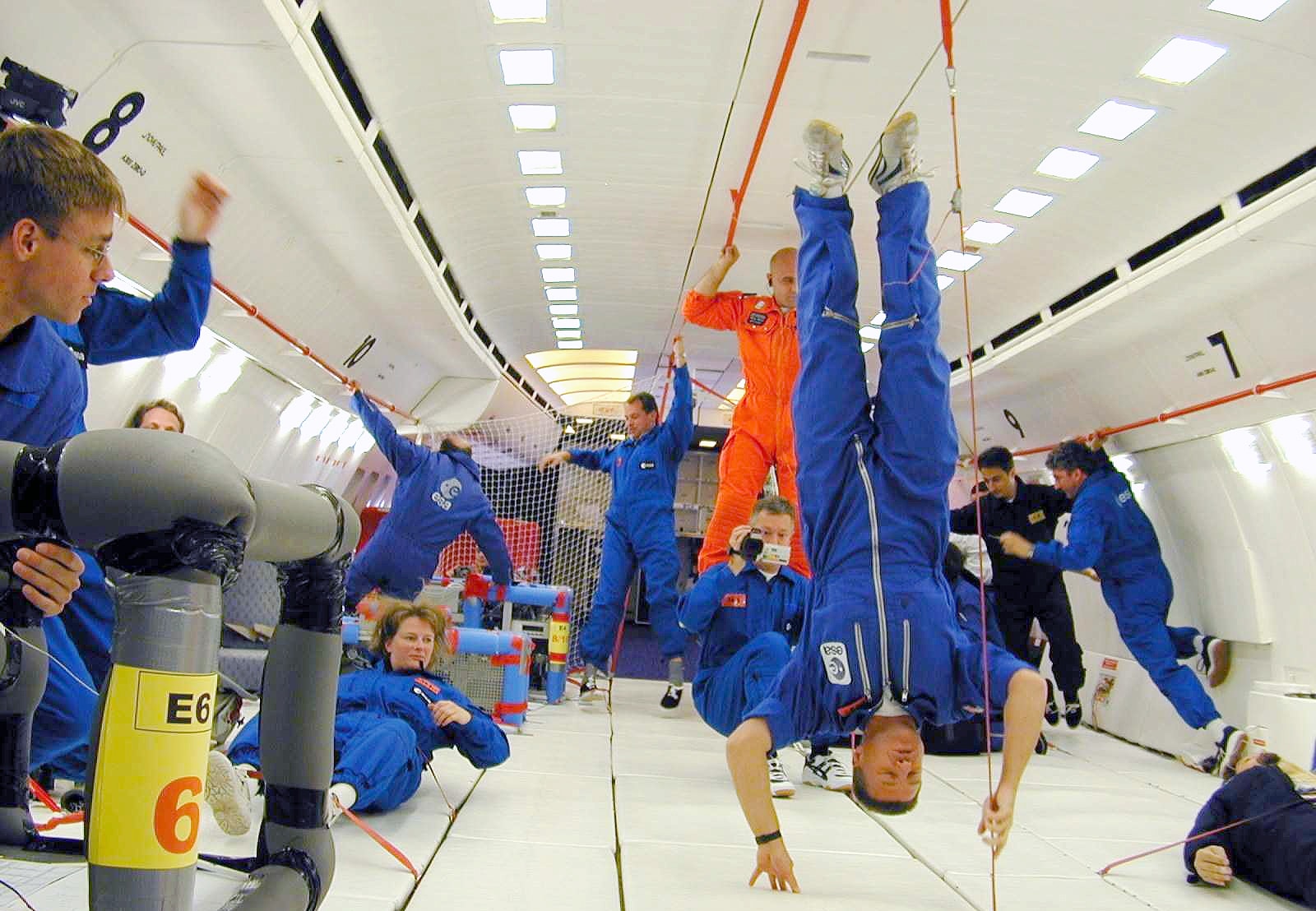 There is no up nor down in weightlessness (Credit: ESA)

Furthermore, for scientific experiments to be performed during space missions, the following goals can be pursued during parabolic flights:

(1) Assessment of preliminary results for newly proposed experiments, which can improve the final design of the experiment hardware;

(2) Test of experiment critical phases on which the experiment success depends;

(3) For human physiology experiments foreseen to be conducted on astronauts in space, to obtain prior to or after a space mission a broader microgravity data baseline by conducting parts of the space experiments on a group of subjects other than astronauts;

(4) To repeat shortly after a space mission parts of experiments that were not fully satisfactory in space or that yielded conflicting results, giving indications on possible interpretations of experiment results.

From a technical point of view, in preparing experiment hardware for manned spaceflight or robotic missions, the following objectives can also be achieved:

(2) Assessment of the safety aspects of instrument operation in reduced gravity;

(3) Training of astronauts on experimental procedures and instrument operation. 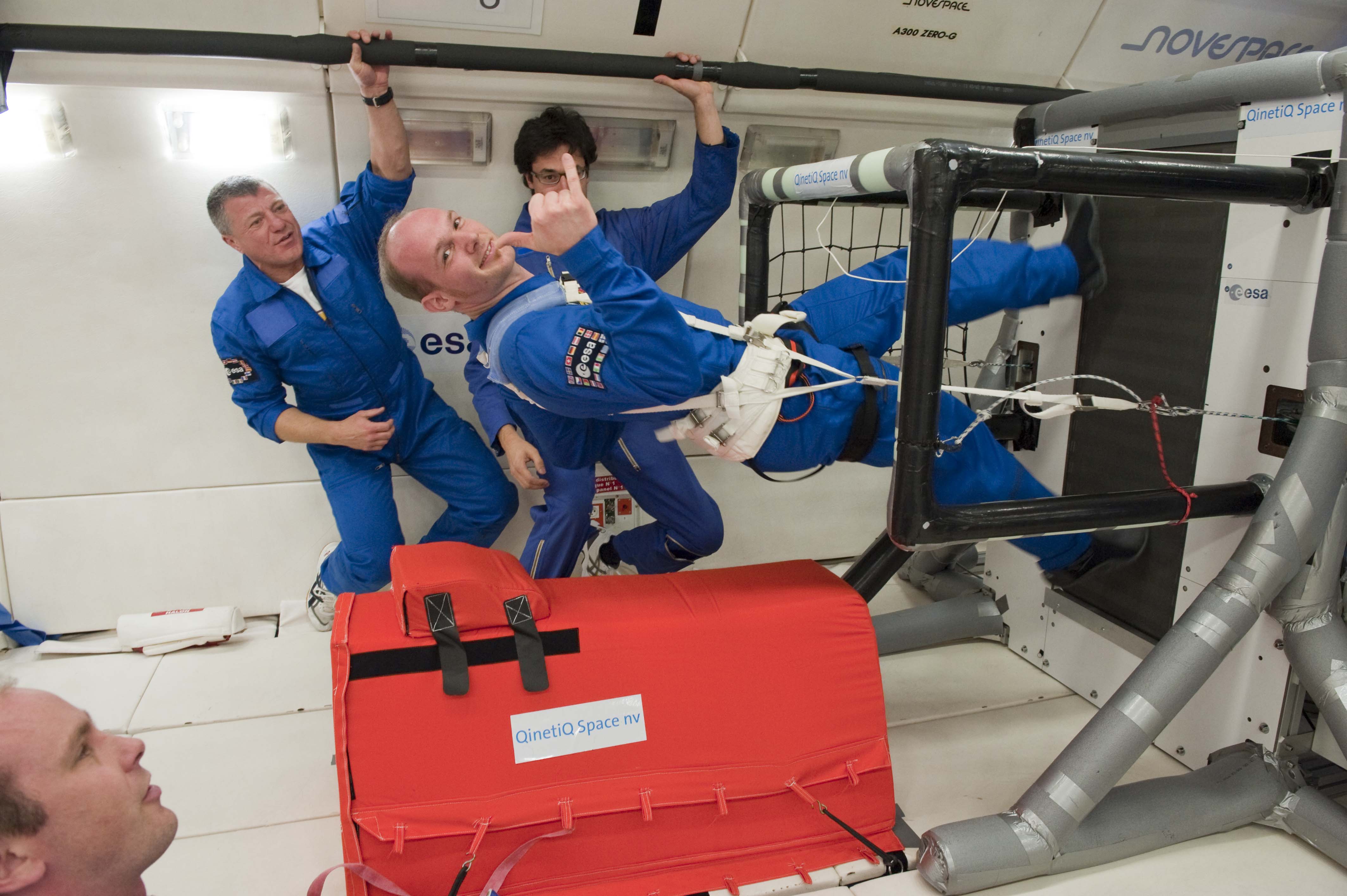 Furthermore, aircraft parabolic flights are the only suborbital carrier to provide the opportunity to carry out medical and physiological experiments on human subjects under conditions of microgravity or reduced gravity such as that found on other planetary bodies (Martian 0.38 g, Lunar 0.16 g), to prepare for extra-terrestrial planetary exploration.

Finally, other g-levels are also achievable during flights and can be used by investigators: e.g. during pull-up and pull-out manoeuvres, periods of 20 s of 1.8 to 2 g's are achieved, and spiral turn manoeuvres provide for longer periods or other levels of high g. These hypergravity periods can be used for certain type of gravity dependent investigations, e.g. in combustion or physiology areas.

For 0g flights, the microgravity environment is created in an aircraft flying the following manoeuvres:

Alternatively, for partial g parabolas, the engine thrust is reduced sufficiently to a point where the remaining vertical acceleration in the cabin is approximately 0.16g for approximately 25 s or 0.38 g for approximately 32 s with angles at injection of approx. 42° and 38° respectively for Moon and Mars parabolas.

The parabolic flight manoeuvre of the Airbus A300 (Credit ESA)

These manoeuvres are flown separated by intervals of several minutes. The duration of intervals between parabolas can be arranged prior to the flight so as to give enough time to investigators to change an experimental set-up. A typical flight duration is about two to two and half hours, allowing for 20 to 30 parabolas to be flown per flight, in sets of five, with two minutes intervals between parabolas and with four to six minutes between sets of parabolas. Parabolas are flown in dedicated air zones controlled by well-trained Air Traffic Controllers.

Regarding acceleration levels, during the reduced gravity period, a transitory phase of about 5 s appears first, with variations of about 10-1g in the Z-axis direction, followed by a period of approximately 20s with acceleration levels of about a few 10-2g, while accelerations along the aircraft longitudinal X-axis (aft to front) and transversal Y-axis (right to left) are less than 10-2g. The residual accelerations sensed by experimental set-ups attached to the aircraft floor structure are typically in the order of 10-2g, while for an experiment left free floating in the cabin, the levels can be improved to typically 10-3g. 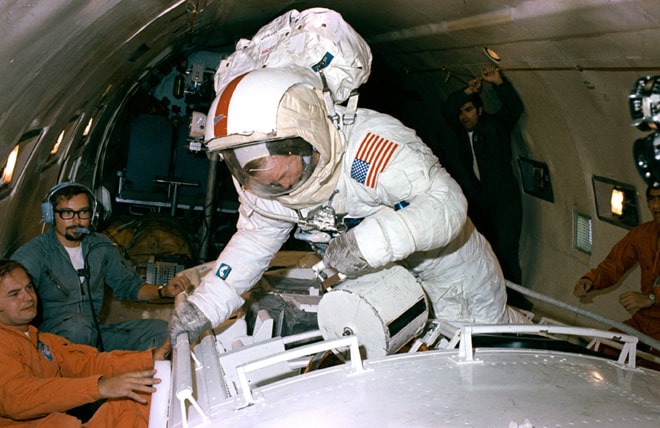 Astronaut training for an EVA exit out of a mock-up airlock (Credit: NASA)

The piloting is usually done manually along the X-axis (adjusting the engines thrust), the Y-axis, and along the Z-axis (using visual references utilising coarse (+2 to -2g) and fine (+0.1 to -0.1g) accelerometers).

As aircraft parabolic flights are considered as test flights, particular precautions are taken to ensure that all operations during flights are made safely and that flying participants are adequately prepared for the repeated high and low gravity environments.

Prior to a campaign, Blue Abyss will provide support in the experiment equipment design and in related safety aspects. All experiments to be performed and all equipment to be embarked on board the aircraft are reviewed by experts several months before a campaign from the structural, mechanical, electrical, safety and operational points of view. Technical visits are made to the experimenters' institutions to review equipment. A safety review is held approximately one month before the campaign. During this review, the integration of all equipment is discussed and the overall safety aspect of the campaign is assessed. Finally, a safety visit is made in the aircraft prior to the first flight to verify that all embarked equipment complies with the safety standards. 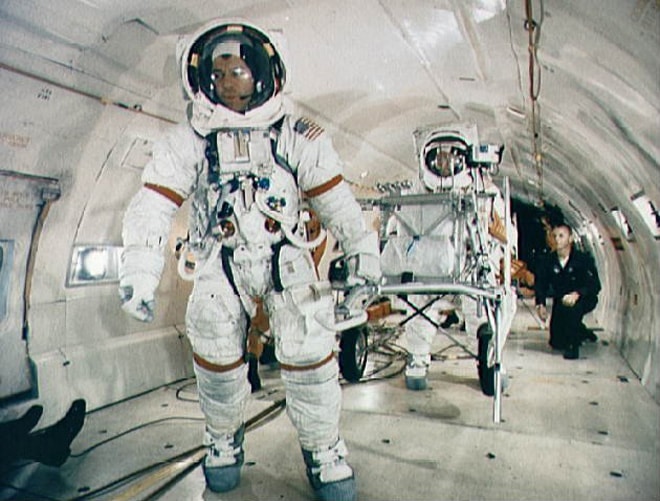 During the flights, specialized personnel supervise and support the in-flight experiment operations. In addition, a Flight Surgeon participates in all parabolic flights to supervise the medical aspect of in-flight operations and to assist participants in case of sickness. Due to the association of flight phases of low and high gravity, motion sickness is quite common among participants of parabolic flights, sometimes hampering them in the conduct of their tasks. Prior to the flights, anti-motion sickness medication (based on Scopolamine) is made available on the request of the flying participants. 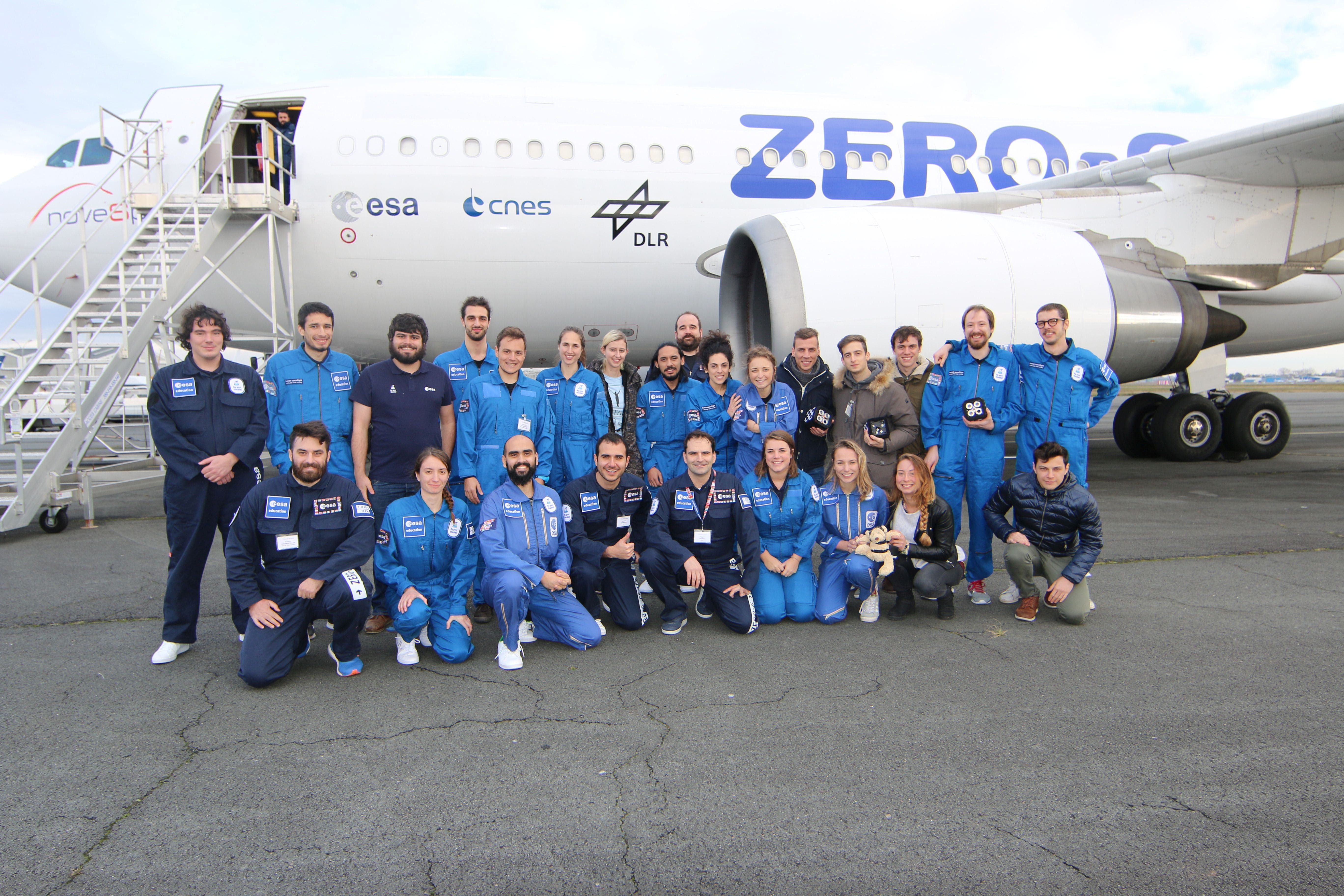 The campaign itself takes place over two weeks. The first week is devoted to the experiment preparation and loading in the aircraft, culminating with a safety visit on the Friday of that week to assess that all safety recommendations have been implemented. During the second week, a flight briefing is organised on Monday afternoon to present the flight manoeuvres, the emergency procedures and medical recommendations, and all experiments are shortly presented by the investigators. The three flights of up to 30 parabolas each take place on the mornings of the Tuesday, Wednesday and Thursday followed each time by a debriefing during which the needs and requests of investigators are reviewed and discussed. Due to bad weather or technical problems, a flight can be postponed from the morning to the afternoon or to the next day. Flight participants are therefore advised to foresee the Friday as a potential backup day. Downloading of all experiments takes place on the afternoon after the last flight.

A post-campaign workshop is usually organized a few months after the campaign where investigators are invited to present their results. Investigators are further invited to publish the results of their experiments and to communicate their findings online, for example using the Erasmus Experiment Archive (EEA) database of the European Space Agency, accessible on Internet (http://spaceflight.esa.int/eea/).